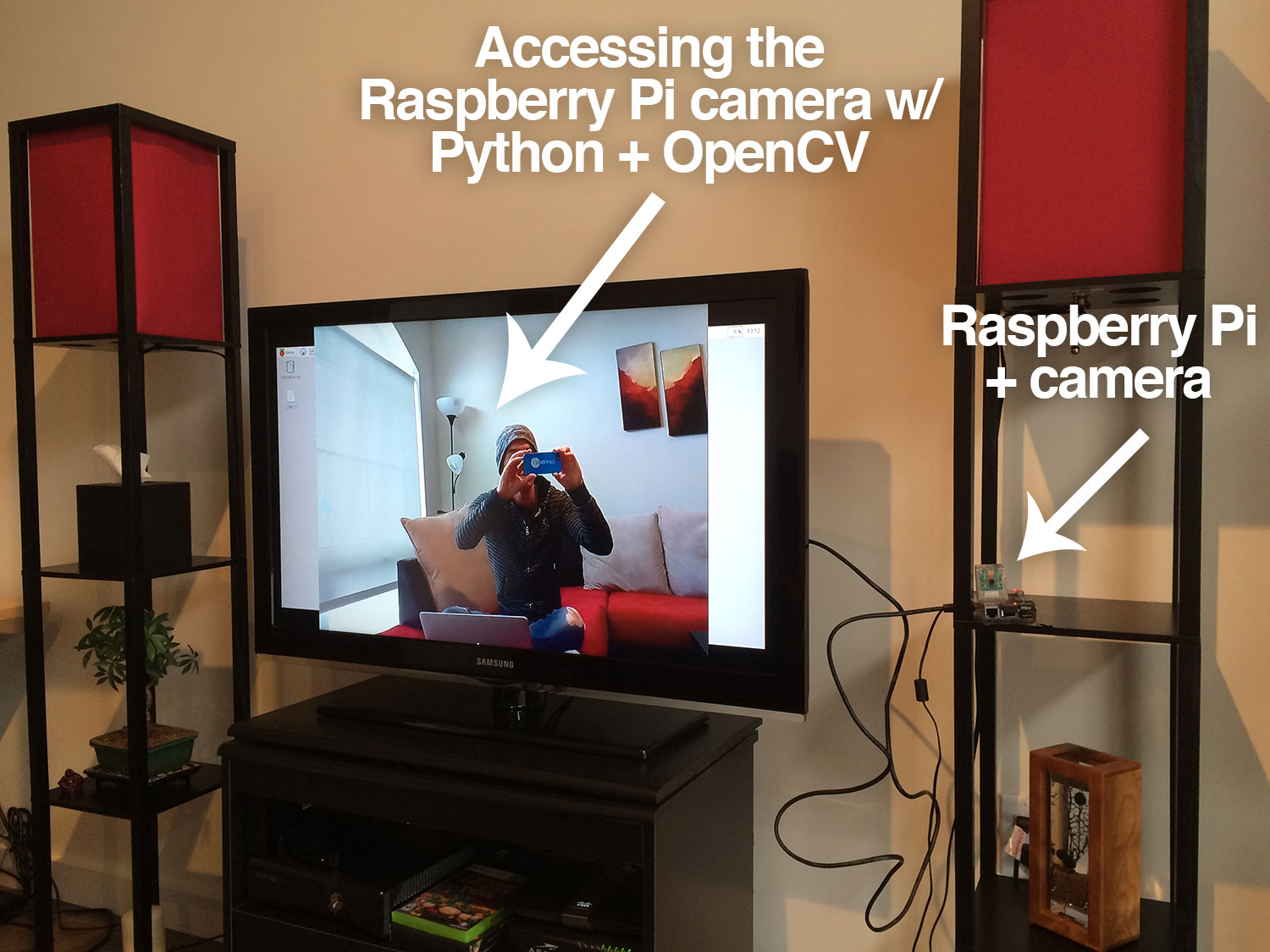 In this tutorial we’ll be using picamera, which provides a pure Python interface to the camera module. And best of all, I’ll be showing you how to use picamera to capture images in OpenCV format.

To get started, you’ll need a Raspberry Pi camera board module.

Assuming you already have your camera module, you’ll need to install it. Installation is very simple and instead of creating my own tutorial on installing the camera board, I’ll just refer you to the official Raspberry Pi camera installation guide:

Assuming your camera board and properly installed and setup, it should look something like this: 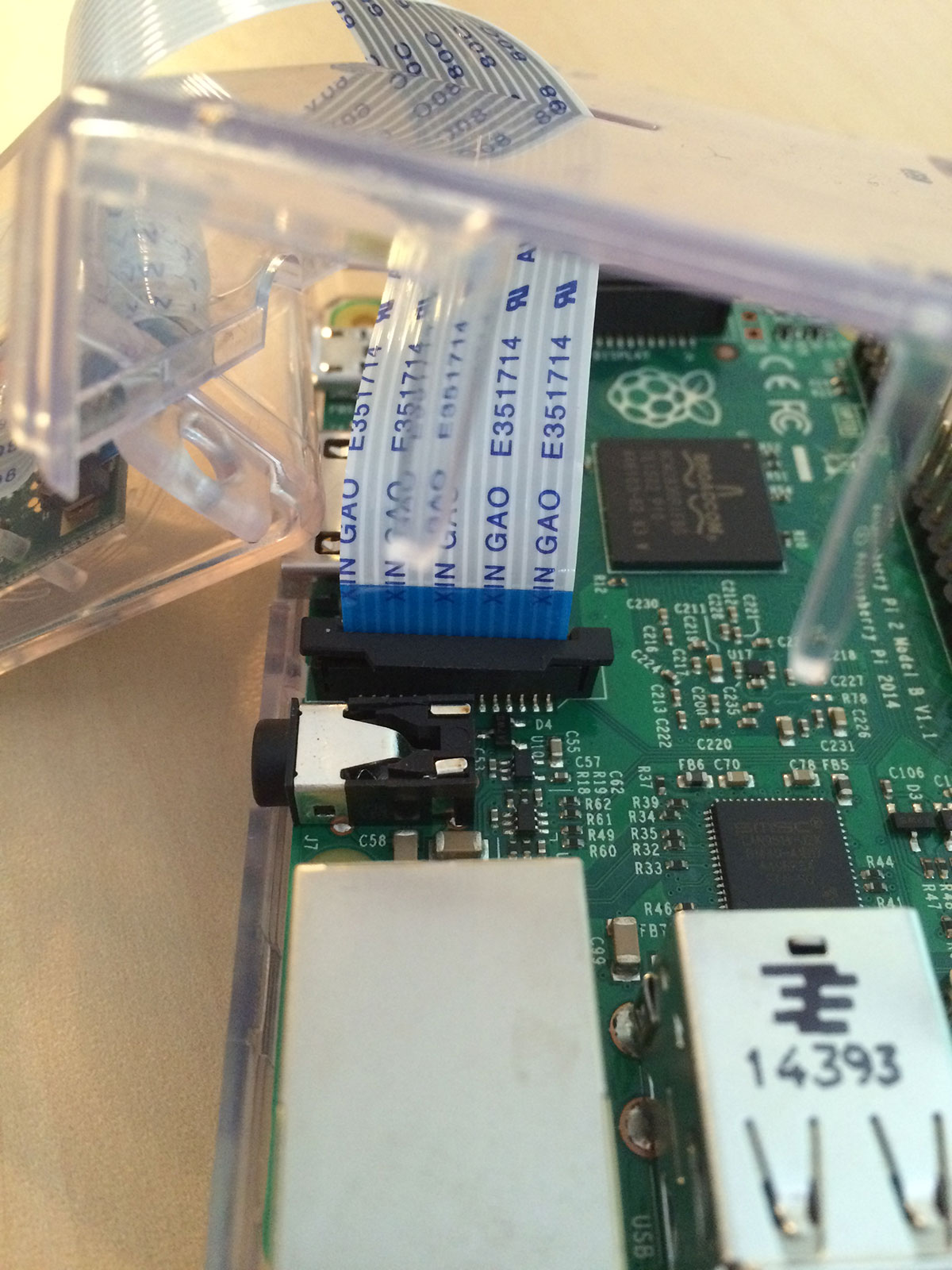 Now that you have your Raspberry Pi camera module installed, you need to enable it. Open up a terminal and execute the following command:

This will bring up a screen that looks like this: 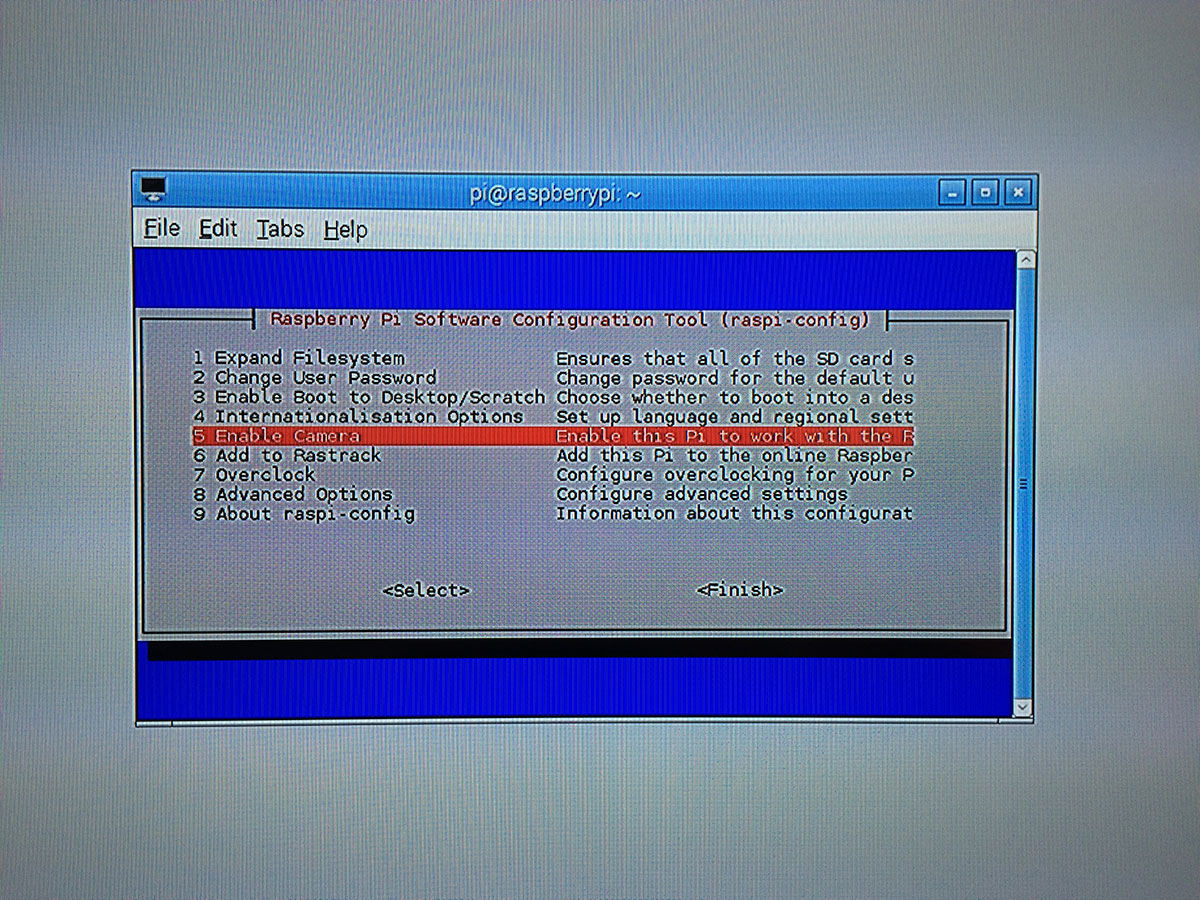 Use your arrow keys to scroll down to Option 5: Enable camera, hit your enter key to enable the camera, and then arrow down to the Finish button and hit enter again. Lastly, you’ll need to reboot your Raspberry Pi for the configuration to take affect.

Step 3: Test out the camera module.

Before we dive into the code, let’s run a quick sanity check to ensure that our Raspberry Pi camera is working properly.

Note: Trust me, you’ll want to run this sanity check before you start working with the code. It’s always good to ensure that your camera is working prior to diving into OpenCV code, otherwise you could easily waste time wondering when your code isn’t working correctly when it’s simply the camera module itself that is causing you problems.

Anyway, to run my sanity check I connected my Raspberry Pi to my TV and positioned it such that it was pointing at my couch: 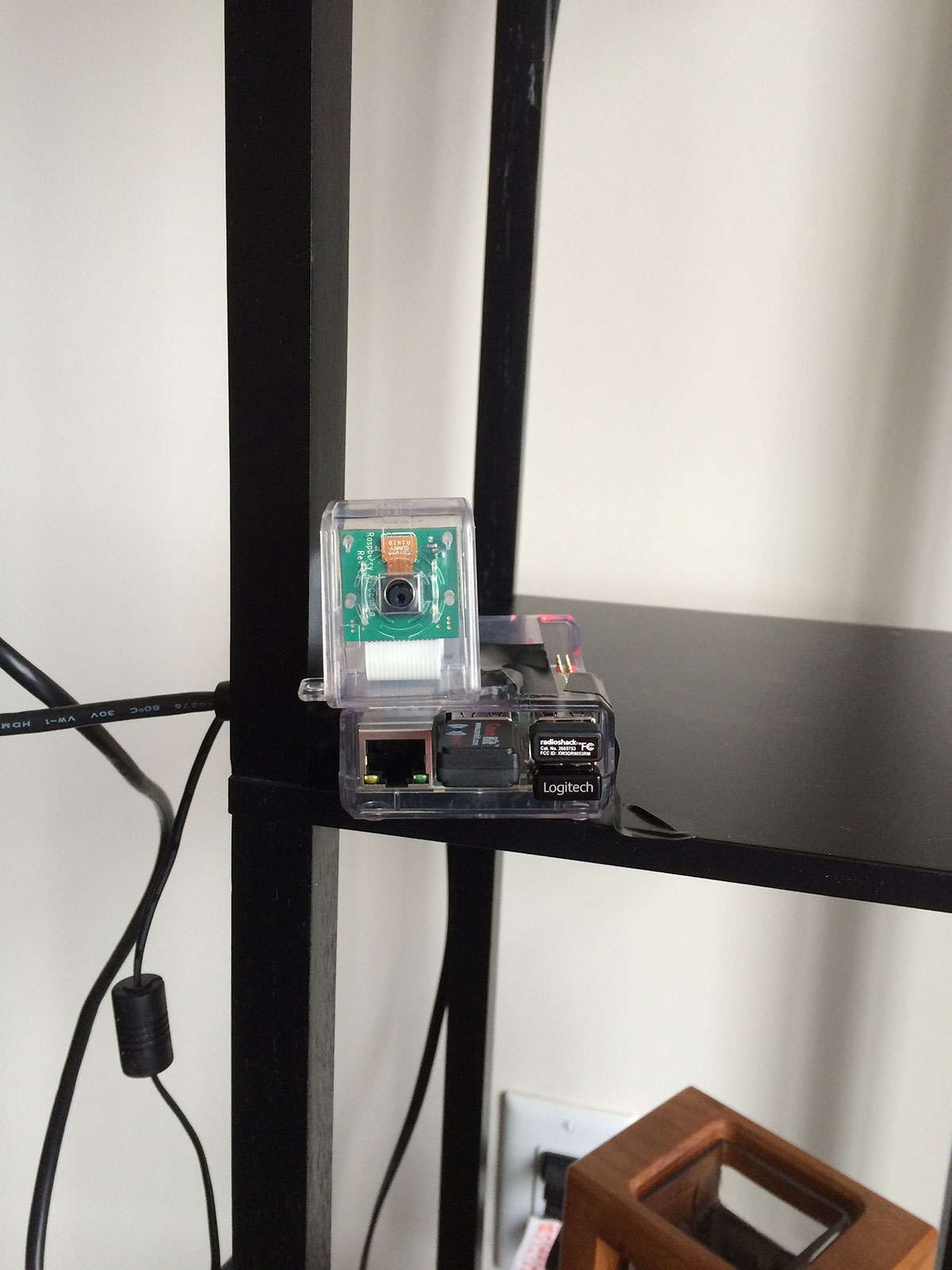 Figure 3: Example setup of my Raspberry Pi 2 and camera.

And from there, I opened up a terminal and executed the following command:

This command activates your Raspberry Pi camera module, displays a preview of the image, and then after a few seconds, snaps a picture, and saves it to your current working directory as output.jpg .

Here’s an example of me taking a photo of my TV monitor (so I could document the process for this tutorial) as the Raspberry Pi snaps a photo of me: 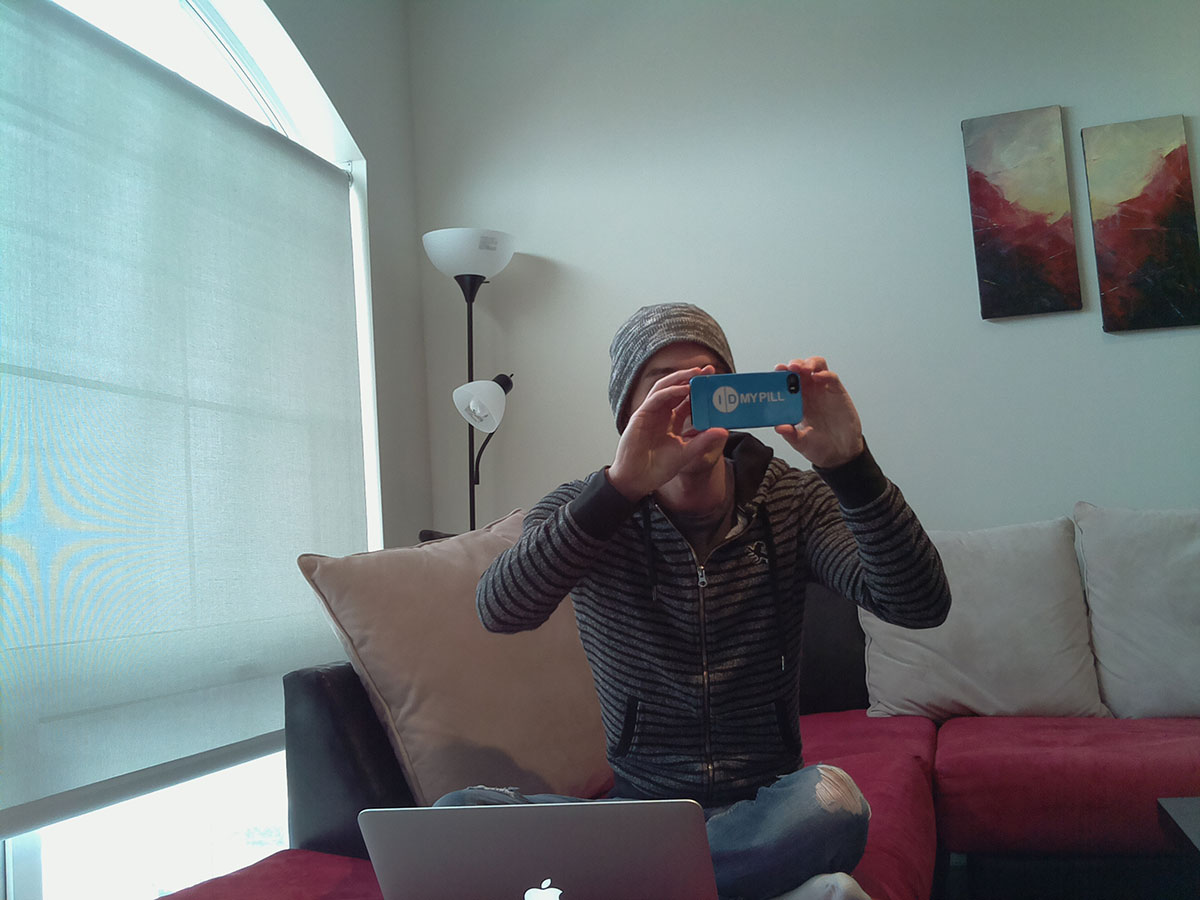 Clearly my Raspberry Pi camera module is working correctly! Now we can move on to the some more exciting stuff.

The answer is the picamera module.

Remember from the previous tutorial how we utilized virtualenv  and virtualenvwrapper  to cleanly install and segment our Python packages from the the system Python and packages?

Well, we’re going to do the same thing here.

Before installing picamera , be sure to activate our cv  virtual environment:

Note: If you are installing the the picamera  module system wide, you can skip the previous commands. However, if you are following along from the previous tutorial, you’ll want to make sure you are in the cv  virtual environment before continuing to the next command.

And from there, we can install picamera by utilizing pip:

IMPORTANT: Notice how I specified picamera[array]  and not just picamera .

Why is this so important?

While the standard picamera  module provides methods to interface with the camera, we need the (optional) array  sub-module so that we can utilize OpenCV. Remember, when using Python bindings, OpenCV represents images as NumPy arrays — and the array  sub-module allows us to obtain NumPy arrays from the Raspberry Pi camera module.

Assuming that your install finished without error, you now have the picamera  module (with NumPy array support) installed.

Step 5: Accessing a single image of your Raspberry Pi using Python and OpenCV.

Alright, now we can finally start writing some code!

Open up a new file, name it test_image.py , and insert the following code:

Accessing the Raspberry Pi Camera with OpenCV and Python
Python

We’ll start by importing our necessary packages on Lines 2-5.

From there, we initialize our PiCamera object on Line 8 and grab a reference to the raw capture component on Line 9. This rawCapture  object is especially useful since it (1) gives us direct access to the camera stream and (2) avoids the expensive compression to JPEG format, which we would then have to take and decode to OpenCV format anyway. I highly recommend that you use PiRGBArray  whenever you need to access the Raspberry Pi camera — the performance gains are well worth it.

From there, we sleep for a tenth of a second on Line 12 — this allows the camera sensor to warm up.

Finally, we grab the actual photo from the rawCapture  object on Line 15 where we take special care to ensure our image is in BGR format rather than RGB. OpenCV represents images as NumPy arrays in BGR order rather than RGB — this little nuisance is subtle, but very important to remember as it can lead to some confusing bugs in your code down the line.

Finally, we display our image to screen on Lines 19 and 20.

To execute this example, open up a terminal, navigate to your test_image.py  file, and issue the following command:

If all goes as expected you should have an image displayed on your screen: 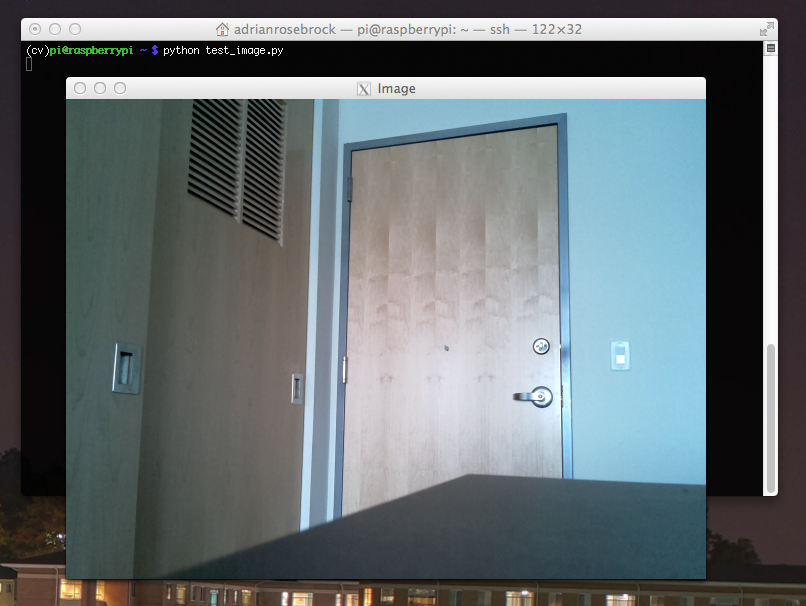 Figure 6: Grabbing a single image from the Raspberry Pi camera and displaying it on screen.

Note: I decided to add this section of the blog post after I had finished up the rest of the article, so I did not have my camera setup facing the couch (I was actually playing with some custom home surveillance software I was working on). Sorry for any confusion, but rest assured, everything will work as advertised provided you have followed the instructions in the article!

Step 6: Accessing the video stream of your Raspberry Pi using Python and OpenCV.

Alright, so we’ve learned how to grab a single image from the Raspberry Pi camera. But what about a video stream?

You might guess that we are going to use the cv2.VideoCapture  function here — but I actually recommend against this. Getting cv2.VideoCapture  to play nice with your Raspberry Pi is not a nice experience (you’ll need to install extra drivers) and something you should generally avoid.

And besides, why would we use the cv2.VideoCapture  function when we can easily access the raw video stream using the picamera  module?

Let’s go ahead and take a look on how we can access the video stream. Open up a new file, name it test_video.py , and insert the following code:

Accessing the Raspberry Pi Camera with OpenCV and Python
Python

This example starts off similarly to the previous one. We start off by importing our necessary packages on Lines 2-5.

And from there we construct our camera  object on Line 8 which allows us to interface with the Raspberry Pi camera. However, we also take the time to set the resolution of our camera (640 x 480 pixels) on Line 9 and the frame rate (i.e. frames per second, or simply FPS) on Line 10. We also initialize our PiRGBArray  object on Line 11, but we also take care to specify the same resolution as on Line 9.

Accessing the actual video stream is handled on Line 17 by making a call to the capture_continuous  method of our camera  object.

This method returns a frame  from the video stream. The frame then has an array  property, which corresponds to the frame  in NumPy array format — all the hard work is done for us on Lines 17 and 20!

We then take the frame of the video and display on screen on Lines 23 and 24.

An important line to pay attention to is Line 27: You must clear the current frame before you move on to the next one!

If you fail to clear the frame, your Python script will throw an error — so be sure to pay close attention to this when implementing your own applications!

Finally, if the user presses the q  key, we break form the loop and exit the program.

To execute our script, just open a terminal (making sure you are in the cv  virtual environment, of course) and issue the following command:

This article extended our previous tutorial on installing OpenCV and Python on your Raspberry Pi 2 and B+ and covered how to access the Raspberry Pi camera module using Python and OpenCV.

In reality, there are many ways to access the Raspberry Pi camera module, as the picamera documentation details. However, the methods detailed in this blog post are used because (1) they are easily compatible with OpenCV and (2) they are quite speedy. There are certainly more than one way to skin this cat, but if you intend on using OpenCV + Python, I would suggest using the code in this article as “boilerplate” for your own applications.